When I got married, I wanted to have a look that was respectful but edgy. My budget wasn’t massive, but there were fews option on the high street that were not super traditional or just a full-on morning suit. I finally went for a “slim-fitting” suit from Reiss accessorised with a knitted black tie. In my mind, my look was “a minor member of the Hives”; in reality, I probably looked super-normal.

That was a good few years ago and, luckily, things have moved on. If the red carpet is any indication, men’s tailoring is no longer about a sharp tuxedo and shoes shined to an inch of their lives. From inverting the monochrome colour scheme and swapping your blacks for whites (Common in Dolce & Gabbana at the Oscars), expressing yourself via lapels (Idris Elba, Nick Jonas, Nas and Orlando Bloom at the Met Ball) or styling down with a loafer or a slipper (Jared Leto’s Gucci footwear at the Oscars), there are multiple ways in which to pull off the “well-groomed” look but not feel anonymous.

Both Topman and M&S have taken these looks on to the high street. Topman’s new range of suiting, This is Tailoring (which launches today), has gone for the “which modern groom tribe are you?” approach. There’s the Joker Groom (a white suit worn with Stan Smith-like trainers, a gambler hat and a red carnation); the Goth Groom (an all-black three-piece suit, worn with shiny black buckled-up brogues), and Throwback Groom (a couple of 70s-leaning looks, modelled on The Sweeney). Meanwhile, M&S’s Wedding Collection includes Peaky Blinder-like shirts and black Monk shoes. 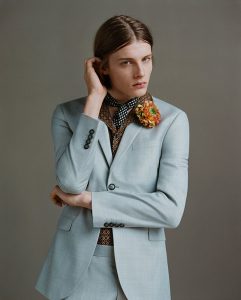 Interestingly, the styling, hair and accessories are most in focus. So the hair (Kid ’n Play hair and hippie curtains) is just as statement as a boldly patterned cravat or a desert sand-coloured shoe. It’s a direct spin off from the red carpet, where expressions of individuality were subtly relayed through the buttoning of a shirt or the wearing of sunglasses. If I had known that back when I got married, I would have been more bold. Perhaps even accessorising with a Tamagotchi.

Must-Have Accessories for Men that Never Gets Old

The 2021 Trends That are Embracing Comfort and Style