So often, talk of the big four and their grudge match with discount stores, Aldi and Lidl, eclipses the steady development of other food stores. With profitability figures and share prices having just been released for what might be described as ‘the big six’, we thought it only fair to take a look at how the rest of the market stands.

Recent figures suggest Iceland surpasses at least the big four, achieving a 3.4% increase in sales, and is only beaten by big players, Aldi and Lidl, chains which show no signs of slowing down in terms of either growth or sales. Kantar Worldpanel research did however indicate that, across the board, increased sales do not necessarily entail accelerated growth, as in the case of Sainbury’s and Iceland. That said, the latter is managing to hold steady, something worthy of note in today’s market. 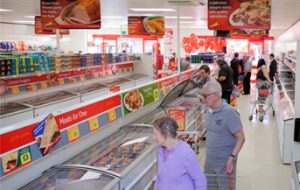 Iceland matches Lidl and Marks and Spencer’s in terms of customer service, with an impressive 69% of customers providing positive reviews. This year’s survey, undertaken by consumer watchdog, Which?, provided key indicators as to why Iceland is managing to retain popularity where other chains are stagnating or decreasing. The store, specialising in frozen food, is, in fact, only second to Aldi in the customer service stakes. Coming third overall, behind premium chain Waitrose in pole position, and superpower Aldi in second, Iceland is silently creeping up on the food retail market.

With the memorable advertising campaign (who hasn’t heard of the, now hashtag, Power of Frozen) which debuted this year, Iceland successfully differentiated itself from other supermarkets, and re-emerged with a clear intent. The company delivers substantially cheaper frozen products, the quality of which can compete with fresh. As the ad explains, “by freezing food as soon as it has been picked, caught or prepared, the taste and quality is at a premium.” Moreover, the series of advertisements, featuring the famous face of Peter Andre, make clear the provenance of Iceland’s frozen range – much of which is sourced by experts.

Frozen is food is no longer a concession to be made when fresh is unavailable. The range of great-tasting foods is the primary reason why customers are choosing, and choosing again, Iceland over its rivals. Its products feature prominently in the British Frozen Food (BFFF) Awards, earning gold, silver and bronze for their supreme taste, as judged by the panel which comprised members of the Craft Guild of Chefs. In total, Iceland products secured more awards than any other retailer including discount giant, Aldi.

With products, on average, 10% cheaper than supermarkets on brand names, according to Iceland boss, Malcolm Walker, and its own brand items big on taste and value, it’s no wonder sales are on the up. By counting itself out of the price war which has captivated the big four for the last 18 months, and investing in high quality products, Iceland has managed to weather the storm. Providing it continues to separate itself from the industry leaders, there should be no reason why Iceland can’t continue to tap into a market which is otherwise overlooked.

BHA Calls For New Law On Tipping And Service Charges

Foods That Can Damage Your Hair