The frenetic pace of the modern world can make it challenging at times to meet up with your friends and connect. That shouldn’t stop you from being able to play and have fun with them though. With such a plethora of games and apps around on the market today the options are endless, try these three top picks for playing with your friends.

Who doesn’t love unwinding with friends in a warmly lit pub after a long work day over a game of pool? The game endures as a favourite among many people due to its accessibility and replay value. It rewards those that invest the requisite time and effort at the table with depth and intricacy of play, yet remains accessible to casual players or total novices. While it can be hard to replicate the thrill of taking an opening break shot in the flesh, there are still some viable options for online play.

The most popular comes by way of classic flash game stalwarts Miniclip with their top down take, 8 Ball Pool. What it lacks in sophistication it more than makes up for with its simple pick up and play format. You can challenge random opponents on the internet or invite your friends. This has never been easier due to the fact the game is now listed as part of Facebook’s on-site Instant Games service.

This opens up the ability to challenge anyone on your friends list to bout, irrespective of whether that be your bestie or your grandmother. With global scoreboards and the ability to share games results to your news feed, it’s no wonder why this humble game has so many ardent fans.

Nothing beats a classic card game like Blackjack when you’re just looking to hang out and unwind with your buddies. Where would scenes of dusty compatriots gathered around a table passing time be without the stalwart that is the 52 card deck? The game took on its modern name shortly after it made the jump to the Americas, where, in the 1890s, it became the go to passtime for Klondike gold prospectors out west looking to manifest their destiny in the hills and mines of the upper Yukon basin.

The evolution of Blackjack has seen the game take many forms but the general premise remains the same; that is, to win by creating card totals that are higher than those of the dealer’s hand, but that do not exceed the value of 21. Online platforms host a range of game types, from classic styles to variants like Three Seat Blackjack. These are generally available through mobile apps so that you can pick up and play on the go. 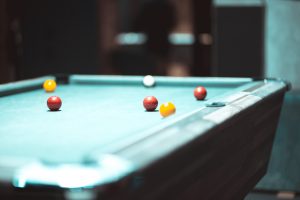 If you’ve not heard of Among Us by now, you must be living under a rock. With over 100 million copies of this game downloaded to date, the suspicious space mystery game was the break-out viral hit of 2020.

The action takes place on a spaceship where you are one of 10 astronauts adrift in the vastness of space. Your goal, ostensibly, is to keep the ship in good working order. There’s a catch however, in the fact that one of you is not who they appear to be. Yes, there is an imposter on board and they are tasked with surreptitiously killing off the other crew members.

Your job is to meet with the rest of the crew whenever something suspicious (like finding a body!) necessitates an emergency meeting. Can you collectively figure out who the imposter is, or will they succeed in their missions to kill off the crew and sabotage the ship? To get the most out of the game it’s best to play with a group of friends where the subterfuge and suspicion involved in navigating the scenario a round makes for a party atmosphere that is the stuff of legend.

Vegan Products Continue To Become More Popular All The Time

All That You Need To Know About Testosterone Replacement Therapy

Is a Plant-Based Diet the Answer to Obesity?

Are You Really In Touch With Your Emotions?

How Often Should You Clean Your Bathroom