London Fashion Week is over and, until the catwalk is readied once more for the Autumn/Winter showcase early next year, we can watch high street stores gather pace in their own collections, as they seek to replicate the visions of the industry’s finest. As Milan prepares to take down the streamers and sweep up the glitter following that performance by Nicki Minaj, and it falls to Paris to deliver the final instalment of one of the most prestigious industry events of the calendar year, we give you a round-up of events and look ahead to next year.

Until its finale last Tuesday, for six days, London was a “who’s who” of international stardom, with eminent designers, style-conscious film stars, and some of the biggest names in the modelling world all flocking to the capital to get the inside scoop. Featuring new Spring/Summer 2016 collections from the hottest designers, including ranges from Burberry, Jasper Conran and Vivienne Westwood’s Red Label, the event went some way to rivalling its precursor in New York. With shows taking place across the city, the throng navigated London’s busy streets in search of the next big thing and were not disappointed by the offering.

By far the show which drew the biggest audience was Burberry, largely thanks to designer Christopher Bailey who has transformed the brand since his recruitment in the millennium. Striding down the runway in the idyllic Kensington Gardens was a distinctly more relaxed Burberry, the likes of which we’re not used to seeing following its tradition of highly-tailored looks and its preference for long cuts. It wasn’t just Burberry’s new designs that pulled in the crowds however, as the brand also made history as one of the first to offer its range exclusively via a live stream as it hit the catwalk. Both decisions mark efforts from Burberry to revitalise the brand and, with strong industry acclaim, is an approach sure to have shoppers equally delighted.

Still relatively young in fashion years, having being propelled by its appearance on the cover of Vogue in 2005, UK-based Johnathan Saunders consolidated the brand image with a reiteration of bold prints. Tapping into a stable trend, the continuation of such a signature is still bound to stir up the high street and prompt the release of new colourful print pieces. 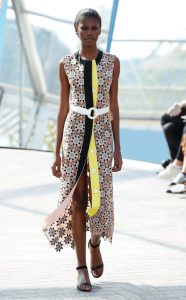 That said, the black cut-out dress stole the show: in Milan, Proenza Schouler went all out with a distinctly flamboyant take on the trend while, in London’s Sky Garden, Christopher Kane kept it demure with a silhouette-cutting black dress. Versus Versace, meanwhile, gave us a hotch-potch of the two. Its gladiatorial outfits teamed a figure-hugging tank (featuring the cut-out) with flowing pants.

Fashion Week is notorious for revealing the beautiful, as well as the somewhat outlandish, vision of designers across the world, and this year was no different. The London show didn’t fail to produce some trends we’d more than struggle to replicate on the street and, Christopher Kane, with its avant-garde looks – including a cable-tie choker, certainly takes the gong this year. 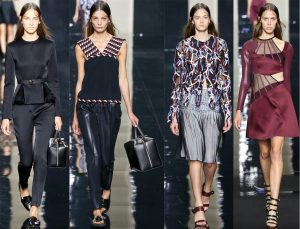 Anya Hindmarch similarly ripped up all the rulebooks. In an ode to the 80s British high street, her collection drew upon the distinctive logos permeating the industry. It made use of the John Lewis emblem and, with tongue settled firmly in cheek, the familiar blue and white of Boots was emblazoned on a pair of its footwear. Moreover, with a nuanced and innovative use of mirrors, her models and garments were duplicated three-fold, evoking the proliferative language of consumption.

With such an eclectic mix of styles and aims coursing through the collections, it’s difficult both to provide a comprising overview, and predict just what trends will take hold and resurface as significantly less expensive copies. Nevertheless, the designers can be united by their drive to innovate, and in some cases – politicise, fashion. Such a personal investment in their products has been critical in producing the garments showcased this time around, and will necessarily be the approach they have to take should the high-end fashion industry remain as lively and buoyant as the high street in the near future.

How To Make Your Entrance Stand Out

How To Wear More Color

Tasteful Kitchen Essentials to Brighten up Your Life

What Can Affect Your Dog’s Behaviour?

What to Get a Vegan for Christmas (That are Actually Good)