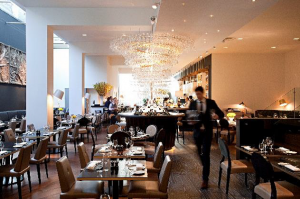 For the month of April, D&D London’s Avenue restaurant in Mayfair will host a month-long pop-up with chef Ben Orpwood, formerly of Sexy Fish and Zuma. Ben will be bringing an innovative food concept and brand new menu to the glamorous restaurant situated in St James’s, available from 31st March to 30th April.
The residency comes ahead of the opening of D&D’s first Japanese restaurant, Issho, a new roof-top restaurant and cocktail bar in Leeds, which will open later this Spring with Ben at the helm. The menu at the Avenue pop-up will draw on Ben’s authentic yet modern Japanese cooking background and will preview several dishes to feature at Issho such as smoked steak tartare with nashi pear and sweet potato crisps and roast diver scallop with pickled apple and jalapeño. New main courses include half or whole native lobster with ponzu and wild garlic butter and whole soy glazed baby chicken served with fries and slaw.
Ben Orpwood initially joined Zuma as a Chef de Partie way back in 2005, working on the launch of the brand’s Istanbul and Dubai outposts before spending five years in the best kitchens in Sydney. He returned to London in 2015 to work as Executive Chef of celeb-favourite Sexy Fish before moving back to Zuma as Executive Chef. Now, as part of the D&D London family, this Avenue residency celebrates his last hurrah in London before he relocates to Leeds to open Issho.

Mahiki Will Open in Manchester in September

Spirit Restaurant has Teamed up with Blue Apple Veterans Charity