The UEFA Europa League, the second biggest competition in continental level in Europe, is back with matchday 4 of its group stage and with it a lot of interesting matches for the fans of football.

And, of course, for the fans of betting as well. That is why author Kate Richardson made UEL predictions on some pretty interesting matches, thinking about helping those who want to place bets and try to make some money in the UEFA Europa League.

Let’s take a look at the matches and the predictions.

Arsenal, one of the big 6 teams in England, will travel to Norway next Thursday in order to face Molde at the Aker Stadium.

The Norwegian team occupies the 2nd place in the league table, with six points, three more than Rapid, the third place, and three less than Arsenal, who are currently at the top of the table. Last Saturday, Molde beat Stabaek (0-3) at the Norwegian League, reinforcing their status as second place at Eliteserien.

Arsenal have won the three games so far in this Europa League and lead the Group B with nine points. Last weekend, Mikel Arteta’s men added the second game in a row without winning in the Premier League, after a goalless draw against the newly promoted Leeds United.

In a match that is expected to be relatively balanced, due to the management that Arteta will have to do with his team, as usual in this Europa League, Molde will certainly have the possibility of creating some goal opportunities. On the other hand, it is unlikely that Arsenal will not continue to do what it has done easily in this competition, which is to score goals. For the expectation of a game where both teams must create danger with relative ease, betting on the market of BTTS is a good option.

The Scotish club Glasgow Rangers will welcome Portuguese Benfica next Thursday at the Ibrox Stadium for matchday 4 of Group D. Both teams are currently with 7 points, being in first and second place, respectively.

The team led by Steven Gerrard goes to this game after adding two beautiful victories in the Premiership, both at home, against Hamilton (8-0) and Aberdeen (4-0). On the other hand, Benfica will be far from their best in the last matches, even though they really intend to leave Scotland with the three points.

Last weekend, Jorge Jesus’ men fulfilled minimum services in the Portuguese Cup and beat Paredes (0-1), breaking a cycle of three consecutive games without winning, where they lost against Boavista (3-0) and Braga (2-3) and drew with Rangers (3-3) for matchday 3 of the UEL.

A very balanced game is expected between the two best teams in Group D. At home, Rangers will probably try to take control of the match during all the game, even though they will be playing against a team with an offensive mentality. Thus, it is expected a duel really disputed from side to side, where both teams try to win and isolate themselves in the 1st place of the table. Once again, the best option here is betting in the BTTS market.

For Group F, at the AFAS Stadion, AZ Alkmaar will welcome Real Sociedad for matchday 4 of the UEFA Europa League.

The Dutch team appears in 2nd place in the league table, with the same six points from Napoli and Real Sociedad, who are the favorites to qualify for the next round of the competition. However, as things are still not solved, AZ will probably go to the match trying to surprise their opponents. They come from a simple 1-0 victory against Emmen in the Eredivisie, where they are only in 7th place.

On the other hand, Real Sociedad are showing great football in Spain and are the unusual leaders of La Liga. In the Europa League, they have the same 6 points as AZ and Napoli, even though they are currently in 3rd place. Getting a victory against AZ at the Netherlands could mean guaranteeing the qualification to the next round.

In a game that is very important to the aspirations of the two teams in terms of qualifying for the knockout stage of the Europa League, the expectation is for a balanced game most of the time. Even so, due to the higher quality of the game in the various aspects that Real Sociedad has been presenting, AZ Alkmaar is expected to face a more difficult match. Thus, Real Sociedad’s Asian handicap (-0.25) is a good option. 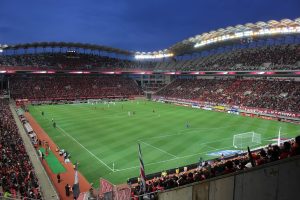 These three matches are expected to be very interesting and provide the fans a lot of excitement and good football. For bettors, there are some good opportunities to make money.

If we had to choose one market for all the matches, it would certainly be the BTTS, because all the confrontations seem pretty equal and with goals being able to happen to both sides. However, you can search for some Correct Score Bet Tips and try to make a bigger bet.

The Five Secrets to Throwing the Perfect Party

The Greatest Events at Wembley Stadium