The World’ 50 Best Restaurants 2018 awards, sponsored by S. Pellegrino & Acqua Panna, saw 23 countries across six continents honoured with a place on the list, which culminated with the announcement of the No.1 restaurant in the world – chef patron Massimo Bottura’s Osteria Francescana in Modena, Italy.

Osteria Francescana, which previously held the No.1 position in 2016, was joined in the top three by El Celler de Can Roca (No.2), in Girona, Spain, and Mirazur (No.3), in Menton, France.

The full list of all the winners that made it to this year’s 50 Best Restaurants can be seen here: 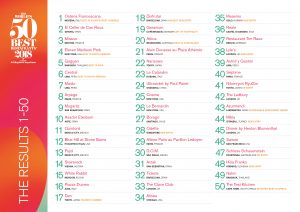 7 Great Gifts To Ask For When You Hold Your Housewarming

Greene King boss is named business leader of the year