Food app with a conscience, Too Good To Go, has joined forces with acclaimed chefs in the South West of England to prevent hundreds of blocks of Cornish Blue Cheese from going to waste this month.

From the 3 August, some of the regions’ top chefs will showcase the Cornish Blue Cheese on their menus. Chefs backing the campaign include Michael Caines MBE who will introduce a complimentary cheese course as part of his menu at The Cove Restaurant in Meanporth and Lympstone Manor in Exmouth.

The Fig Tree @ 36 in Plymouth will also be taking part. Owner Tanya Marsland said: “Cornish Blue Cheese has always been our go to blue cheese, so what better way than to celebrate it with Cornish Blue Cheese week. Shouting out about local is what we pride ourselves in, we are excited to be able to get involved.”

After having a taste of the cheese, each participating restaurant will provide dining customers with direct links to purchase 1kg of Cornish Blue Cheese worth £16 for just £6 through the Too Good To Go app. 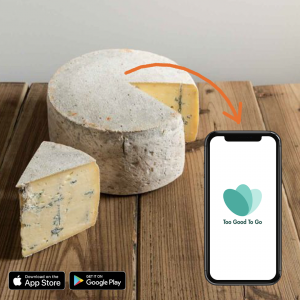 Jamie Crummie, co-founder of Too Good To Go, said: “When we heard that the Cornish Cheese Company were facing having to throw away hundreds of portions of their award-winning cheese, we knew that there was something we could do to help. We’re thrilled to have the support of some of the South West’s most acclaimed chefs and are looking forward to kicking off Cornish Blue Cheese Week next week.”

Too Good To Go lets consumers buy surplus food from restaurants, retailers and producers to stop it from going to waste. Consumers simply download the free Too Good To Go app and search for nearby businesses with unsold food. They then purchase a ‘Magic Bag’, collect it at an allotted time and enjoy it.

For more information on Too Good To Go visit www.toogoodtogo.co.uk.

The National Restaurant Awards Crown The Sportsman Best In Show

The Physic Garden to Offer a New Gin Experience